“How do we make sure that every graduate who leaves Wharton takes on that inclusivity as a core value with them as they move into the boardrooms of companies all across the country?”

When Dillon Patel, WG’23 was growing up, he didn’t see many people like him on television. Now, at age 27, he finds himself on the other side of the screen on Bravo’s docu-series Family Karma. The show, which premiered its second season on June 2, chronicles the lives of Dillon and his multi-generational Indian-American family and friends as they balance modern life with their traditional upbringings.

Dillon joins a small but growing group of openly LGBTQ+ South Asians in the entertainment arena. From Queer Eye’s Tan France to talk show host Lilly Singh and actor Jameela Jamill, Dillon hopes this increased representation ignites positive change in South Asian communities across the country. In fact, he’s already seeing the difference it can make from the messages he’s received from some viewers.

“It has opened doors in ways that I didn’t know were possible. I had several people tell me that seeing my story gave them the confidence to come out to their family or it sparked conversations that were otherwise not happening. Now in so many South Asian families, they are talking about what it’s like to grow up queer or gay and South Asian,” said Dillon.

Prior to appearing on Family Karma, Dillon was living a fairly low-profile life working as Senior Manager of Global Operations at Zendesk, a customer support software company, in San Francisco. But he was no stranger to being an outspoken leader and advocate for the LGBTQ+ community. Shortly after joining Zendesk he began to lead the company’s LGBTQ Employee Resource Group, Pride ERG, and went on to institute several groundbreaking initiatives.

“I’m most proud of launching a Pride mentorship program where we paired folks across offices internationally who are within our community. We also advocated for changes to our benefits that included more trans-inclusive healthcare coverage, mental health services and also support for those who want to start families in less traditional ways such as surrogacy, egg-freezing, or adoption,” he said.

Pride ERG also led Zendesk’s application for the Human Rights Campaign’s “Best Places for LGBT Equality” and earned the company a perfect score of 100. Even as Dillon departs Zendesk to attend Wharton, he knows the work will continue. “For me, it was especially impactful because every year or so the HRC will continue to add additional criteria for inclusivity that I’m hopeful Zendesk will continue to meet.”

This advocacy work earned Dillon the distinction as Wharton’s second Prism Fellow. Established in 2019 by Jeffrey Schoenfeld, WG’84, the Prism Fellowship awards a full-tuition scholarship to one MBA student who demonstrates leadership in support of the LGBTQ+ community. “First, it’s incredible that something like the Prism fellowship even exists. The fact that Jeffrey, Wharton, and so many folks are willing to invest in the community in a substantial way is huge to me. I also recognize the fact that Wharton is full of stellar applicants and I’m so incredibly grateful that I was chosen to be awarded this prestigious fellowship.” 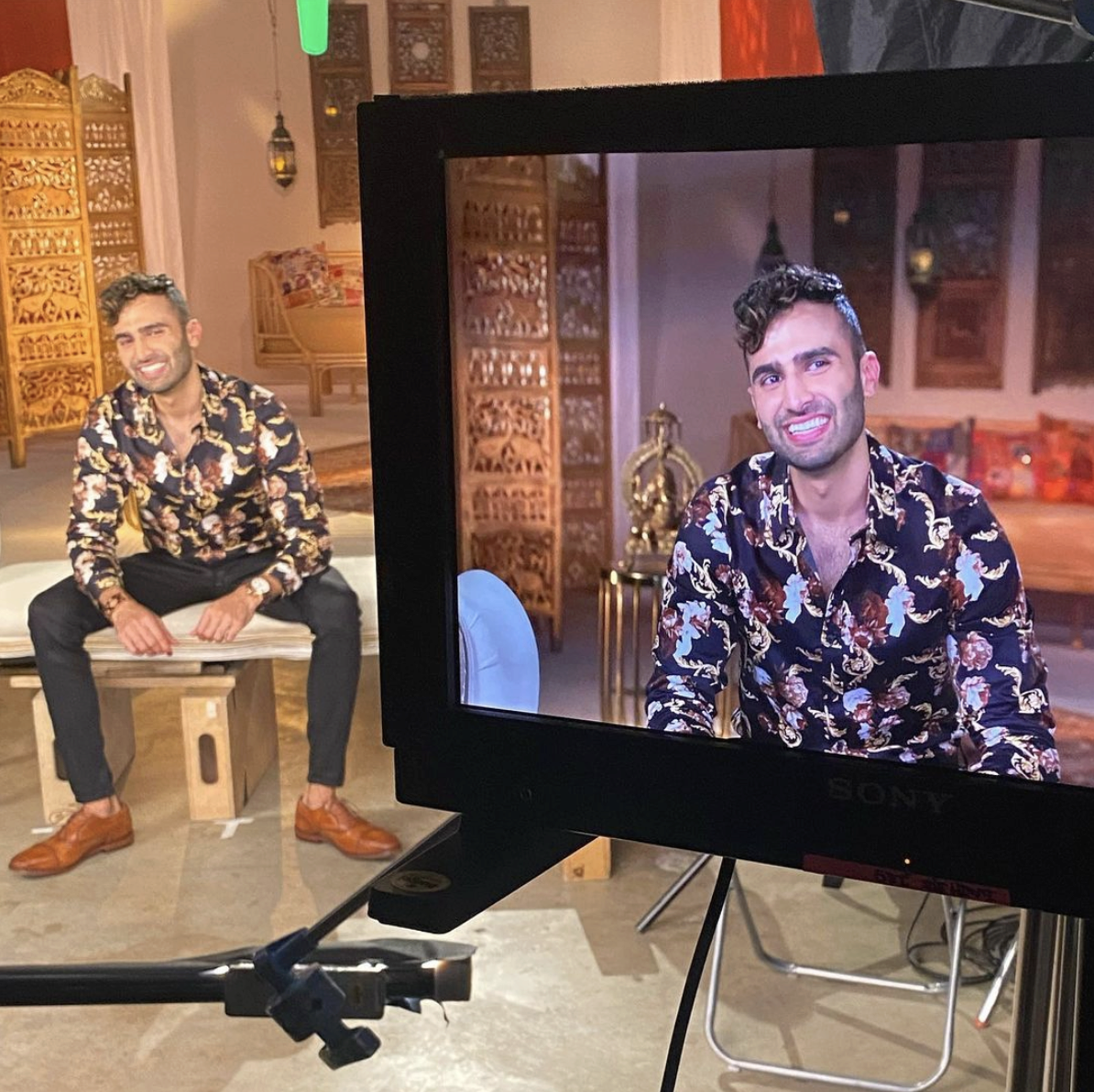 Behind the scenes: Filming interviews for Bravo’s Family Karma. (Photo via @dillonpatelme)

As far as his interest in business, Dillon was exposed to entrepreneurship from a young age. He watched his family start small businesses wherever they lived. Dillon’s grandfather started a fish and chips business in London and later his parents opened an electronics store after they settled in Miami. Even as a high school student, Dillon made some extra cash collecting his classmates’ used textbooks and selling them online. “That entrepreneurial spirit is something that runs really deep. My family restarted themselves in four different countries, coming from India, spending time in Africa, starting businesses in Jamaica and England, and finally Miami, that it just felt part of our blood that business is what we do.”

It was only natural for him to major in economics at Duke University, where he nurtured his talents and discovered new industries where he could thrive. Thanks to the Out For Undergrad conference, Dillon was connected to employers like PwC looking to hire LGBTQ+ students like him. “It really opened my eyes to what consulting was like. I could get experience at many different companies, see the inside and out, and found that project-based teamwork was what I really excelled at.” In the summer of 2015, Dillon landed an internship at PwC that led to a full-time Associate role after graduation from Duke.

As he prepares to embark on the next two years at Wharton, Dillon hopes to learn new skills and build on his breadth of experiences. He notes the P3 Program by the McNulty Leadership Program, Prof. Stephanie Creary’s class “Leading Diversity in Organizations”, and the flexible curriculum as highlights on his agenda. “I think working at Zendesk made me realize that I want to stay in the technology space and I care about mission-driven companies, but I probably want to explore some different functions like corporate development or product development.”

When he arrives on campus for MBA Pre-Term this August, Dillon plans to become an active member of the Out4Biz and Southeast Asia Club and work to find ways Wharton can become even more inclusive beyond the confines of the classroom. “How do we make sure that every graduate who leaves Wharton takes on that inclusivity as a core value with them as they move into the boardrooms of companies all across the country? How do we make sure that inclusivity of the LGBTQ+ community is a core part of the Wharton experience?” he said. 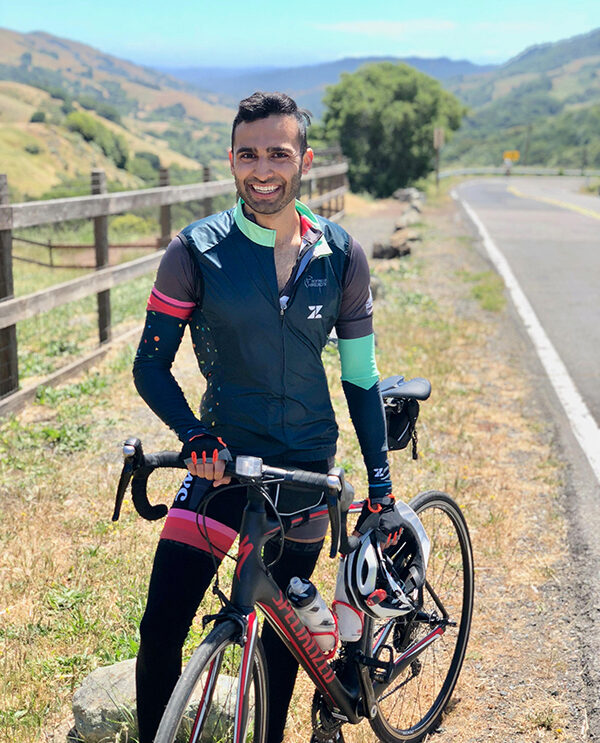 Dillon joined 2,000 cyclists to take part in the AIDS/LifeCycle, a 545-mile ride from San Francisco to Los Angeles that raises funds in the fight against HIV/AIDS.

What does “Pride” mean to you?
Pride began as an act of resistance in a society that wasn’t ready to accept folks who were different. Pride to me means being unapologetically yourself. It means recognizing that the things that make us different are not a burden, but rather a superpower.

Tell us about Dilpop. What was the inspiration behind this line of apparel?
Dilpop Is a play on my name (Dillon), the hindi word for heart (dil), and the positive energy I strive to bring into the work (pop). The brand is a reflection of the many aspects to my identity (first generation American, South Asian, gay, extroverted) & my interests (fitness, technology, travel, pop culture). A percent of proceeds from every sale will go towards causes that I’m passionate about in support of Transit Equity and LGBT Rights.