He and his team of lawyers, all of whom identify as LGBTQIA+, argued successfully to decriminalize homosexuality in the Indian Supreme Court.

I spoke with Udai Bhardwaj, Wharton’s 2022 PRISM Fellowship recipient and incoming WG’24 student, who galvanized a movement in India to decriminalize homosexuality. He and his friends took their fight to the Indian Supreme Court in 2018, and found victory on September 6 of that year. Udai told me what it took to beat bigotry on a federal level from his pre-term vacation in a seaside town in Goa, India. He traveled there with friends who are also incoming Wharton MBA students.

He joined me via Zoom, wearing a colorful button-up and his trademark smile. His jet-black hair had streaks of color: threaded braids, which his friends convinced him to have done by the local women who braid hair on the beach.

I am twenty-seven-years-old and grew up in Delhi. I have a twin sister and older sister who I love very much. I had a very happy childhood until my parents divorced when I was twelve, which was really hard on me and my family. My mother juggled us kids and her work as a public school teacher. She is a hurricane of a person. I am estranged from my father; he will probably only find out I am going to Wharton when this article comes out.

Please tell me about your experience with LGBTQIA+ activism in India.

There wasn’t really a pure inflection point for me, but my activism was more of a natural evolution of my work. When I got to college, I headed our LGBTQIA+ Resource and Support Group. My alma mater, which is a chapter of the prestigious India Institute of Technology schools, is located in a remote part of India which is not a liberal place. It was a small school, which was challenging, because when we started there were not many members – but we still established ourselves and managed to create a safe space. By the time I graduated college, I came out as a gay man to my close friends and family.

I felt comfortable with myself and confident in who I am as a person. But the law fell behind the times. It was a colonial-era law called Section 377 that always hung over our heads, a looming threat that reminded us that we were second-class citizens. We were always at risk: I constantly heard stories of extortion, like criminals on dating apps who lured young gay men to meetups, then blackmailed them with threats to either expose them publicly or hand them over to the police. And the police were no different. They targeted gay cruising spots, would approach people and say: ‘homosexuality is illegal and can get you thrown in jail for ten years; therefore, empty your bank account and give us your money. Only then can you go on your way.’

Because homosexuality was criminalized, there could be no talk of anything further. Forget gay marriage or adoption. At that time, we couldn’t have any protection from discrimination because our identity itself was illegal. We needed to decriminalize gayness before we could do anything else.

The decriminalization of homosexuality in India is a huge deal. How did you accomplish this historic feat?

One of the toughest things was that homosexuality was actually decriminalized first in 2009 by the Delhi High Court, but then was criminalized again in 2013 – re-criminalized, essentially. For a lot of LGBTQIA+ Indian activists, this seemed like the end of the road. I began my adulthood as a criminal in India, because when I turned eighteen homosexuality was illegal yet again.

In 2017, however, the right to privacy was declared as a fundamental right to all Indian citizens. For us gay activists, we realized we could argue that private sexual acts between consenting adults is protected under that same right to privacy. At that moment, my friends and I realized that it was really important for actual LGBTQIA+ individuals to step forward and go to court and say “we are here, we are real.”

And because of my privilege of being out and having support, I felt it was my responsibility to be an activist. I also work for American Express, an American company, so I knew I wouldn’t be fired or discriminated against because of my sexuality.

Ultimately, I accessed twenty LGBTQIA+ people, all of whom belonged to the network from the Indian Institutes of Technology. We were among the best of the best – the schools are the equivalent of the American Ivy League – and filed a petition with a law firm. We appointed a media liaison, and before I knew it I was on CNN, the BBC, and even India Live. My mother did not want me to do the media circuit, nor did my sisters. They said things like “It’s too dangerous. All the neighbors will know; the watchman will know; the milkman will know. You’ll get hate-crimed.” Luckily, that did not happen.

After that, our team of lawyers, headed by two women, argued successfully to get the law repealed in the Supreme Court. The judgment was released on September 6, 2018; and now, the first week of September, Indians celebrate Pride, just as Americans do for the month of June. And as it turns out, our two female lawyers were actually closeted LGBTQIA+ women who were in a secret relationship; and, after the victory, were inspired to come out and now live happily together.

What are your plans for the future? What is your dream scenario for where your MBA might take you next?

One thing I want to study is how to build more inclusive spaces in the workplace, and answer: how do we deal with issues of discrimination at work? It’s what I want to practice when I move to the USA.

I always want to be an ambassador for the community. Having gay role models was something I really needed growing up and I didn’t have. I want to understand DEIA in the workplace better, and I know Wharton can help me better understand how to apply DEIA principles in the workplace.

I have been involved in data science for American Express as well as building marketing campaigns for AmEx. In the near future, maybe I’ll join an early start-up; but for now, my plan is to work in AI and/or the business analytics domain. I am so excited about what my future holds and how a Wharton MBA will help me achieve my dreams. 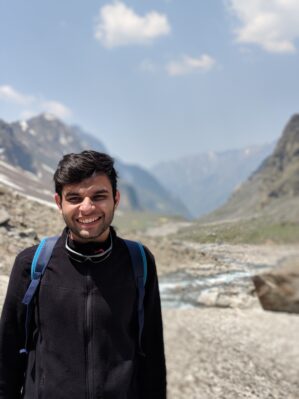 Udai looks forward to learning more about the implementation of DEIA practices in the workplace when he joins Wharton this fall.

How did it feel to achieve something so extraordinary?

It was such a surreal experience. I came out to my family in 2015 and then three years later I was on TV. When I went on TV and spoke about my life and my sexuality it liberated me. It was the moment that I self-actualized, it is the moment I felt: This is who I am. I am not ashamed and I am not afraid.